EyeShotJazz has moved to EyeShotJazz.com. See the Bellevue Jazz Festival 2011. Follow us to our new home. 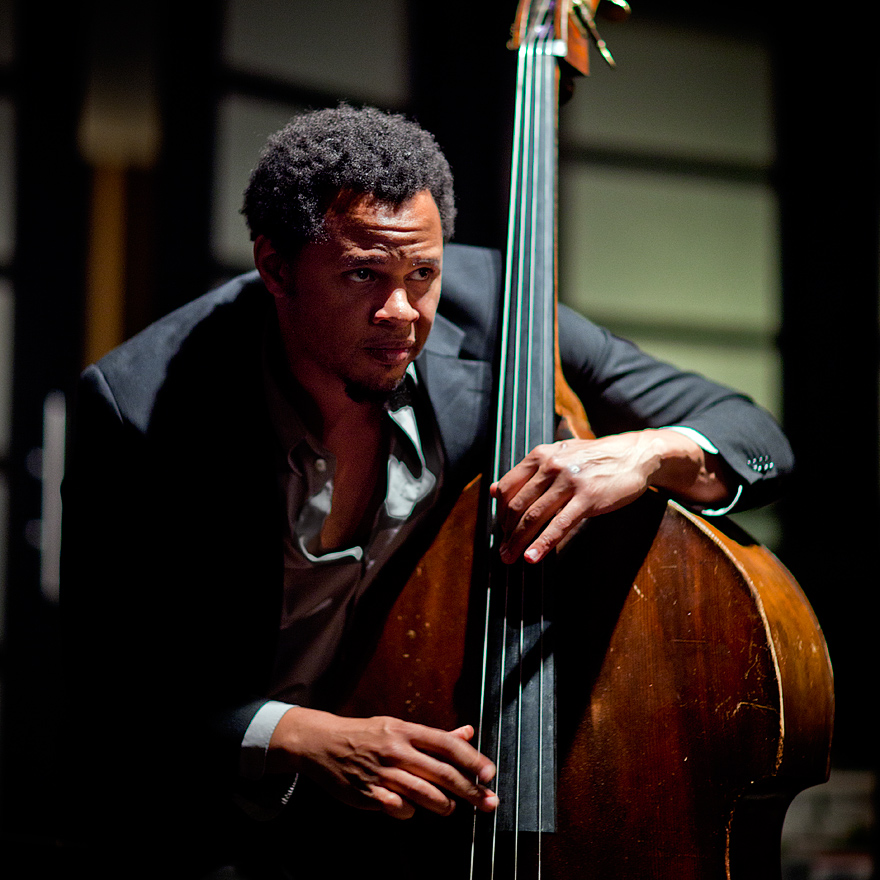 Seattle’s Evan Flory-Barnes, an amazing bassist, and his Threat of Beauty had a great set  at the Twisted Cork Lounge at Hyatt Regency Bellevue as part of  the 2011 Bellevue Jazz Festival last Thursday. Also in the group is Jason Holt on drums and and Jacques Willis on Vibes. Here are a few images from their performance which I really enjoyed.

Eye Shot Jazz Photography is ending at this URL but continues to be updated with new photography over on the new address for EyeShotJazz blog at EyeShotJazz.com. Please go and set your bookmark to get continuing coverage of the Earshot Jazz Festival, Bellevue Jazz Festival and other photographs of great jazz performances in the Seattle area. Visit my main website danielsheehan.com to see samples of portrait, wedding, corporate and editorial as well as  jazz photography at Daniel Sheehan Photography.

Tenor saxophonist and jazz legend Hadley Caliman, 78, passed away last week after a two year battle with liver cancer. Many of you have seen and heard him over the years as he played a lot around Seattle and Portland. Here are some recent pictures of him. Above he was accepting one of his two awards at the Earshot Jazz Golden Ear Awards in Jan 2009 at the Triple Door.
Below are some recent images of him in performance.


“Caliman remained active on the jazz scene until late-August, performing regularly around the Northwest in support of his recent releases: Reunion with Pete Christilieb, which was released in August and is now #31 on the national jazz charts, and Straight Ahead, which is #9 for the year on the Airplay Charts and was in the Top 10 on American jazz radio for many months.” Read more here on The Seattle Jazz Scene.

Seattle photographer Daniel Sheehan Photography creates portraits for publications and is a Seattle Wedding Photographer with a photojournalist style.

Looking for Wedding Photographers in Seattle?

The Don Byron Quartet: Edward Simon (piano), Kenny Davis (bass), Don Byron and Billy Hart (drums) on stage at the Triple Door as the Earshot Jazz Festival carries on in its last week.

The Don Byron Quartet performance was one of the most enjoyable of the Festival so far. Maybe it was the way he sang a Hank Williams tune or how he referenced one of his compositions to the 1968 Olympics high jumper who first took the plunge backwards, but the performance felt very satisfying and complete. I like his eyeglasses too.

Conceived as a means of expressing gratitude to Lester Young, Don Byron’s 2004 release Ivey-Divey convened an all-star trio with Jason Moran and Jack DeJohnette to revisit and reinterpret some of Lester Young’s finest works. Taking its name, orchestration, and much of its repertoire from Young’s great 1940s trio with pianist Nat King Cole and drummer Buddy Rich, Ivey-Divey was immediately recognized as a masterwork. Reflecting Young’s gifts as a communicator, Byron’s ensemble combines the same unbridled joy and enthusiasm of Young’s classic lineup with the innovations and technical advances of the last half century. With Byron playing clarinet and tenor sax, this expanded version of the Ivey-Divey project features Edward Simon (piano), Kenny Davis (bass), and Billy Hart (drums). As with many of Byron’s diverse forays, the Ivey-Divey Quartet is a wholly compelling and at times unpredictable vehicle for Byron and his peers to let loose. From the Earshot Jazz Festival guide. Photographs by Seattle photographer Daniel Sheehan, a photojournalist specializing in jazz photography and portrait photography for publications and corporations and  Seattle photographers with a story-telling approach to creating award-winning wedding photography in Seattle.

The Power of the Single Story -Chimamanda Adichie

This blog, eyeshotjazz.wordpress.com is ending here at wordpress.com, but will continue to be updated at the new address for EyeShotJazz at http://www.eyeshotjazz.com/. Please go and set your bookmark to continue to follow the work of Jazz Photographer Daniel Sheehan. Here is the final posting to this site. Also visit his newest website http://www.eyeshotphotos.com to see samples of all of his work as a Seattle Photographer Eyeshotphotos.

I heard this story from the Nigerian author Chimamanda Adichie on the danger of depending upon the single story and it hit a nerve. Listen to her on this video from TED.

more about “The Power of the Single Story – Chima…“, posted with vodpod

This blog, eyeshotjazz.wordpress.com is ending here at wordpress.com, but will continue to be updated at the new address for EyeShotJazz at http://www.eyeshotjazz.com/. Please go and set your bookmark to continue to follow the work of Jazz Photographer Daniel Sheehan. Visit his newest website to see samples of all of his work at EyeshotPhotos Seattle Photographers Portfolio.

Travis Shook made his comeback to the Seattle jazz scene at Tula’s Jazz Club last Wednesday night, playing in town for the first time in about five years. His performance with the Travis Shook Trio was greeted warmly by a full house. The Seattle Times ran an article by Hugo Kugiya detailing his career’s ups and downs. “The jazz pianist Travis Shook, a curiosity to some who remember his name, a cautionary tale for others, lives in rural, upstate New York, far from the city and the place he first greeted fame. People don’t recognize him much these days, and for a long time he preferred it that way.

“I’m 40 and I feel a lot more comfortable with myself now,” said Shook, a fixture on the Seattle jazz scene in the early 1990s and once considered one of the greatest jazz musicians of his generation. “That’s all that matters to me. Musically, I’m a much better player than I was. But the main thing is that I’m comfortable with myself. That was my biggest hurdle.”

For most, that would seem a small accomplishment, but for Shook, who experienced meteoric success and sudden failure, who was addicted to alcohol and drugs, who was virtually unemployable for a number of years, this is not an insignificant step.

“Comeback,” is the word he settled on.”
Read the rest at The Seattle Times

it was a delight to see and hear Essiet Essiet perform on the bass behind Shook.

Matt Jorgensen was great at drums throughout the set. 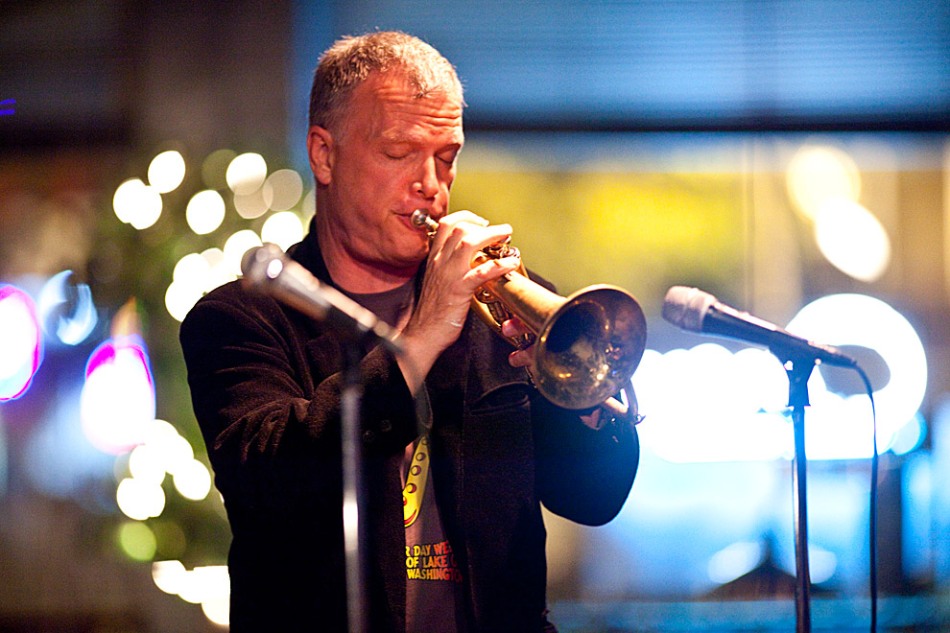 Jay Thomas made an appearance as well during the first set.

Travis looked pleased at the applause at the end of his first set.
Photographs by Seattle Portrait Photographer Daniel Sheehan specializing in photojournalism, portraits and photography for publications and corporations, and photojournalistic Bridal photography. 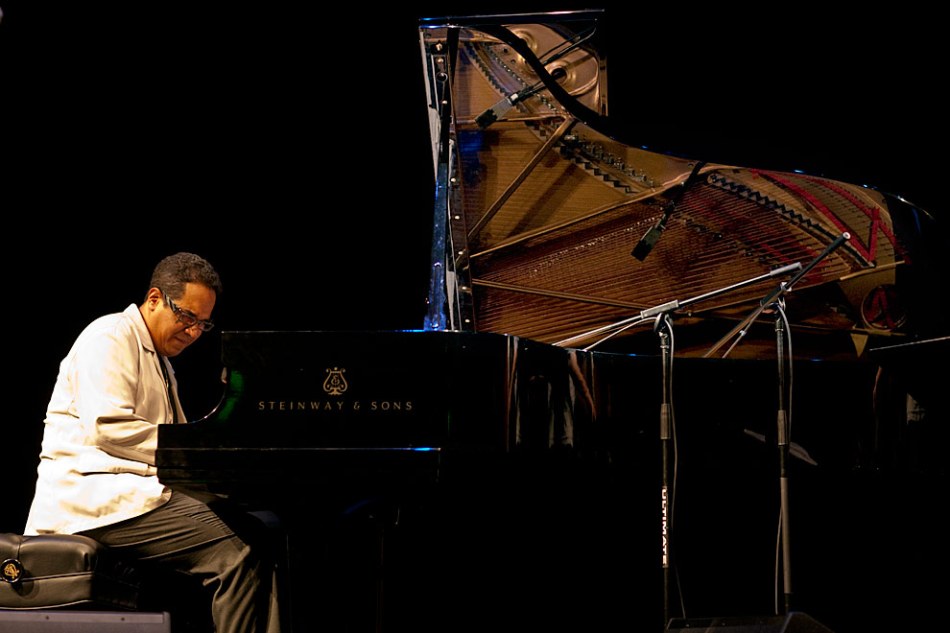 The extraordinary Panamanian pianist and composer Danilo Perez, among the most influential and dynamic musicians of our time performed Saturday as the Bellevue Jazz Festival continued into its second day.
He is a warm and generous soul and it was hard not to feel the joy his music brings to the people in attendance,

The Thing
Mats Gustafsson Blows real hard in performance Thursday night at Poncho Performance Hall in the last of the April Earshot Jazz Spring Series Jazz which started out so long ago on February 25th with Bill Frisell and Russell Malone. 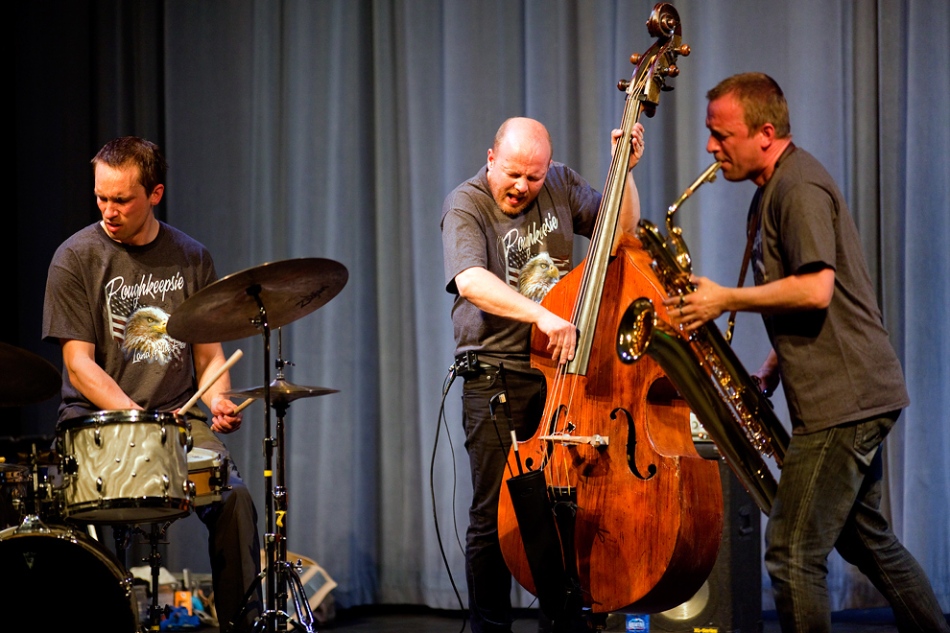 The Thing– Norway’s most ferocious and refined improvisers are Gustafsson – reeds – Ingebrigt Haker Flaten – bass – Paal Nilssen-Love – drums.
What an amazing concert. It was so refreshing to see and hear them play. An incredible amount of energy was expended up on that stage. The photographs in these pages are by   photographer Daniel Sheehan, a photojournalist who also does weddings atA Beautiful Day Photography creating award winning wedding photojournalism . As a photographer with a rather new digital camera, I am beginning to experiment with the HD video capabilities of my Canon 5D Mark II and recorded some of this concert.

Look forward to seeing some of it embedded into an upcoming blog. There is a small matter of editing the footage and getting it hosted and embedded here. It is stuff that may be old hat to some but is new to me. Just keep a look out for it. Seattle photojournalist in general may be ahead of the curve in this department. 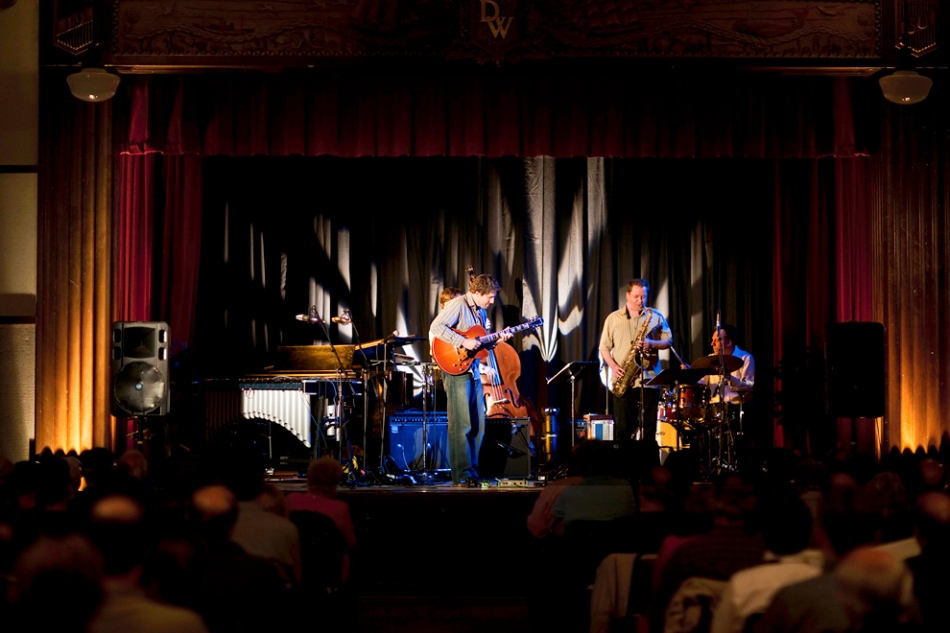 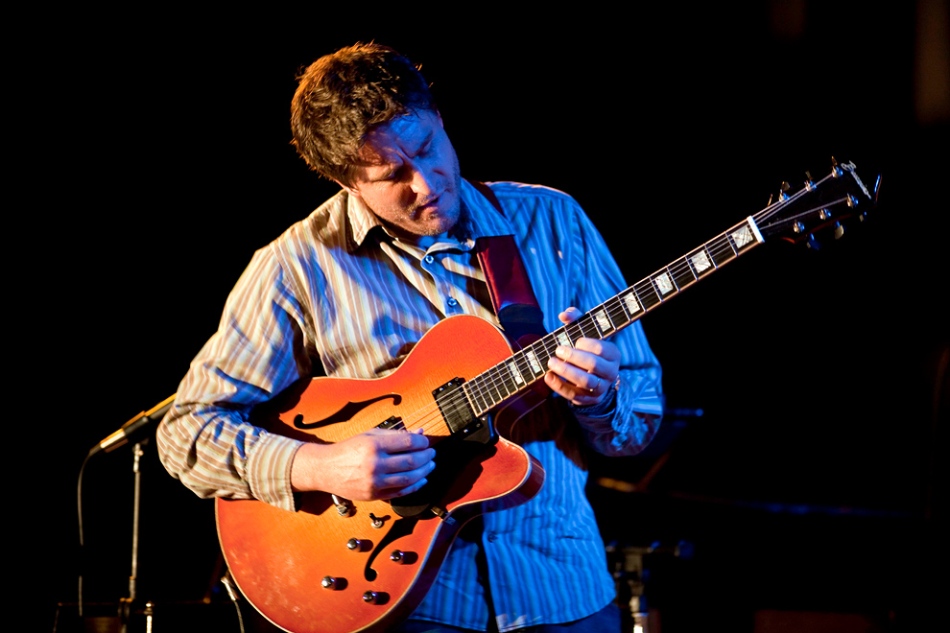 More photos to come from the evening. Sorry for the delay in posting them.

Fred Gilbert and Jenn celebrated their wedding with a number of Earshot Jazz staff and fans at the Asian Art Museum in March. Here is a large group panoramic photo of everyone attending out on the steps in front of the museum.I really love those camels on both sides of the entrance.

I wanted to run another image from a fantastic and entertaining performance, by internationally renowned, award-winning composer, pianist, and NEA Jazz Master Toshiko Akiyoshi . She lead the SRJO in a concert of big band works from her many years touring the globe with the Toshiko Akiyoshi/Lew Tabackin Big Band. Born in Manchuria, Akiyoshi took up jazz as a teenager in Japan, coming to the US in her 20s to immerse herself in the sounds of Basie and Ellington. She became the first woman named “Best Arranger and Composer” by Down Beat magazine, and has recorded over 45 albums with a refreshing view of the art of jazz. 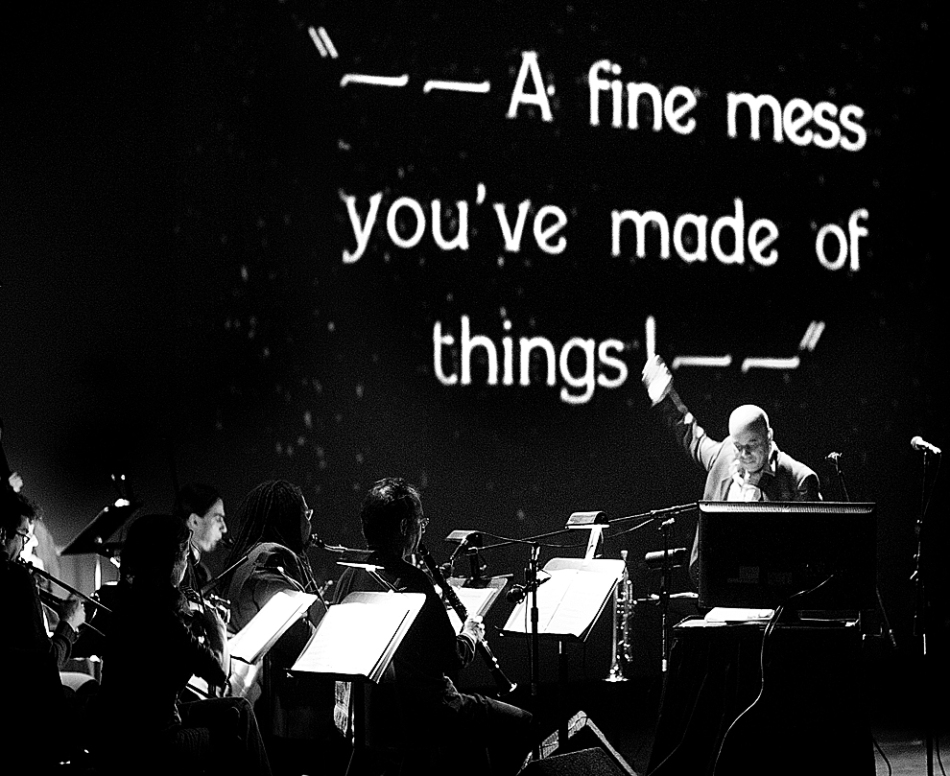 For a Seattle photographer, this was so much fun to watch and photograph this group play to these old movies. I wish they had a regular gig doing this.

New York-trumpeter Steven Bernstein conducts his fine nine-piece band, which typically explores the largely-lost music of the bluesy, loose-territory bands. Tonight he performed in accompaniment to three Laurel and Hardy silent films on the screen behind him at the King Kat Theatre and he and the band had a lot of fun with it as did the audience. The Laurel and Hardy films were classic treasures. Steven Bernstein likes to have his cake and eat it too. The Grammy-nominated trumpeter is one of the hardest-working musicians to come out of New York’s “downtown scene.” He recently released three critically-acclaimed CDs on John Zorn’s Tzadik label and has had his music featured on MTV, Saturday Night Live, and National Public Radio. His ensemble, the Millennial Territory Orchestra, is an outgrowth of his immersion in the sound of the Midwestern swing bands from Robert Altman’s movie Kansas City. The ensemble was formed in 1999 for a series of midnight shows at New York’s Tonic nightclub, and they subsequently spent a year and a half in residency at the Jazz Standard. The group, a collection of distinctive musical personalities, recently released its debut recording, MTO Vol. 1, on Sunnyside Records. This is sure to be an edge-of-your-seat performance, featuring swing band adaptations of several rock and soul genre classics, led by this wonderfully “left of center” musician.